Global climate change and its negative impacts that occur as a result of non-renewable energy sources pose risks that all humans are now facing. Oftentimes it seems that people defer speaking on the topic and ignore the consistent contributions all of us humans make to the decline of the environment.

Metaphors sometimes make it easier to get a point across, so here’s one to help comprehend the severity of this problem. Imagine you have found yourself overweight, and you want to reverse the effects of all the bad eating habits you’ve succumbed to. The difficult part is that you’re always so busy, but your body needs food to create energy and eating at drive-thrus, ordering takeout, or making fast processed food is simply easier. It’s what you’ve always done to create the energy you need to survive. The options to change this and reverse all of the years of bad habits are available. You can pick and choose healthier restaurants to pick up food from, you can cook good, healthy meals at home too, but it’s just too expensive and time consuming for you to commit to. If you never make the time and set aside the money to eat healthily, you’ll never lose all that excess weight. So you are then faced with a decision to continue the bad trends because it’s easier or you can batten down the hatches and make the effort to save your body from all the risks of living such an unhealthy lifestyle, as in heart attacks, obesity, or diabetes.

Now, imagine the earth is the body and our choices of energy are the choices of food. We as humans continuously put these fossil fuels, which act as a steady diet of fast food, into the body of the earth and we see the effects this poor choice of food has on it, yet we continue to pile on the calories. The only difference in this metaphor is that where healthy food for people is more expensive and takes more work, the healthy alternative for the earth is the opposite.

While we mine for coal, natural gas, and oil, the sun shines every day for free. By going with solar energy and installing a solar panel system, a process called net metering can allow your solar panel system to pay for itself by selling the excess renewable energy your system is creating. So if good, nutrient-rich food was cheap and easy to make, it would be a no-brainer for everyone to eat healthy, right? If you think that makes sense, then going with solar energy may very well be as easy of a decision for you to make. 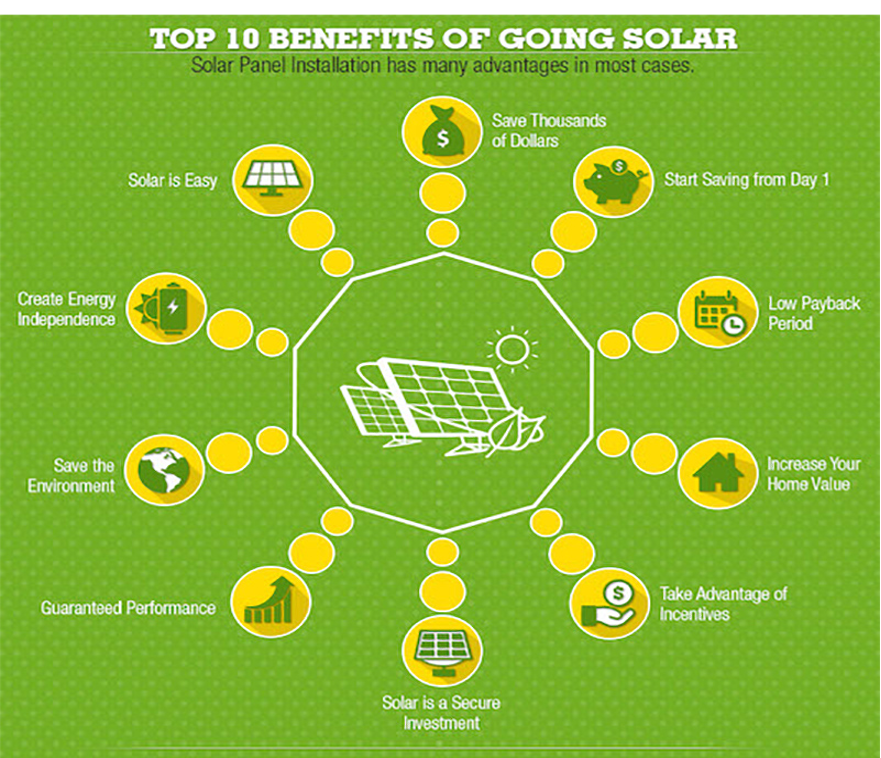 Now that your sense of reason has been appealed to, let us discuss some real evidence that solar energy is making a large, positive impact on the environment around us! On the use of renewable energy, the United States Energy Information Administration said that “Solar energy systems/power plants do not produce air pollution or greenhouse gases. Using solar energy can have a positive, indirect effect on the environment when solar energy replaces or reduces the use of other energy sources…” (Solar Explained). These solar panel systems take pure, unscathed energy from the sun, and help those who have installed solar panels onto their homes to combat their emissions of greenhouse gasses. 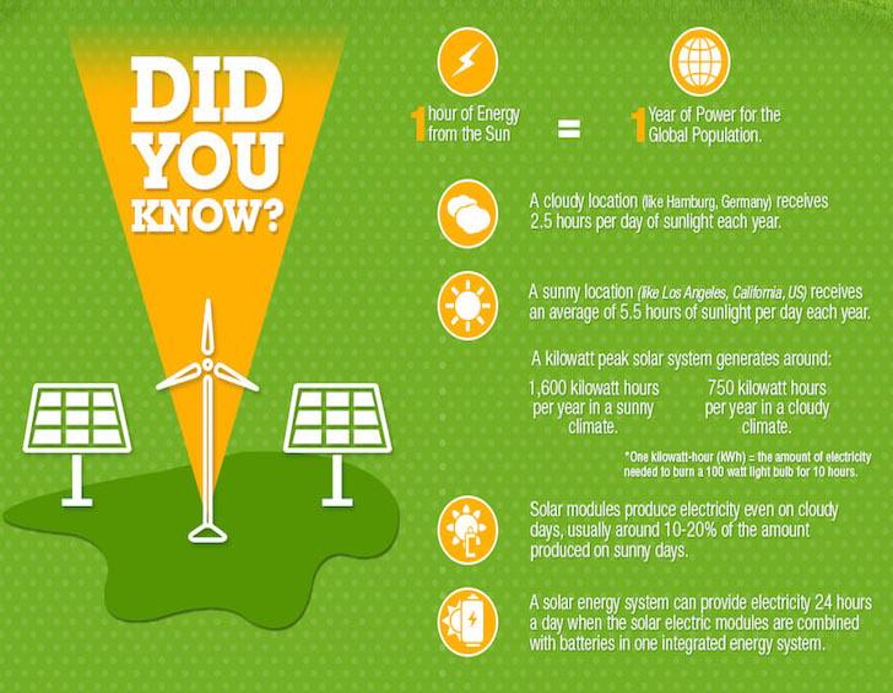 From top to bottom, 1. One hour of energy from the Sun equals one year of power for the global population, 2. A cloudy location receives 2.5 hours per day of sunlight each year, 3.)A sunny location receives an average of 5.5 hours of sunlight per day each year, 3. Solar modules produce electricity even on a cloudy day, usually around 10-20% of the amount produced on a sunny day, 4. A solar energy system can provide electricity 24 hours a day when the solar electric modules are combined with batteries in one integrated energy system.

We as humans have a collective need and overall dependence on these fossil fuels, which not only harm the environment around us when they are used for energy, but they “are also a finite resource. Because of this, the price is constantly fluctuating and can increase in a short period” (Top 4 Reasons). The part that makes this so hard to believe is that it seems that we are paying higher prices for non-renewable, uncleanly energy sources that put the safety of the public at risk due to the air and water pollution they produce when the option of utilizing solar energy is not only environmentally friendly, but can also save us money in the long run. Last, but certainly not least, solar panel systems don’t use water to generate electricity unlike coal, natural gas, and other non-renewable sources that cannot operate during times of drought or heat waves, which puts electricity generation at great risk.

As you can see in this infographic, solar energy produces less than 90% of the carbon dioxide we get from burning coal for electricity and around 50% less carbon dioxide emissions than natural gas. All the while solar is less expensive, and it is easier to harness the sun’s energy than it is to mine for fossil fuels.

After learning about all of the ways these non-renewable energy sources harm our environment, and all of the ways the installation of solar panels can help to negate the years of abuse, how do you now feel about going solar? Would you take the leap to not only make an impact on the environment, which so few of us ever get to say we’ve done, but to also put money back into your pockets? The deal seems pretty sweet and almost too good to be true. Let’s leave off with some statistics that’ll make one last push to help you see the positive environmental impact solar has had and will continue to have on the whole planet.

After reading all of this information, I ask you to look at yourself in the mirror and think about what you’ve done to help the planet lately. I implore you to take a look at solar energy and all its benefits, to call local solar energy companies, ask about their solar solutions, get quotes, and, if you are interested, to find out if you qualify for residential solar installation!

“Impact Of Solar Energy On The Environment.” United Kingdom, www.greenmatch.co.uk/blog/2015/01/impact-of-solar-energy-on-the-environment.