Solar energy is a renewable resource that has the potential to power our Earth in a way that minimizes damage to our environment. In the last blog from Solar is Freedom®, we discussed the overall negative environmental impact that fossil fuel energy has on the planet. We learned about the potential of solar energy as a solution to these negative impacts IF we can make it our primary energy source. Climate change is a dangerous phenomenon happening that is backed by consistent and substantial scientific evidence, including global temperature rise, warming oceans, shrinking ice sheets, glacial retreat, decreased snow cover, sea-level rise, and the increasing number of extremely high-temperature weather events.

What are the causes of global climate change that harms life on Earth, you might ask? Scientists are overwhelmingly certain that the negative impacts of global climate change are all a direct result of carbon dioxide emissions, a majority of which come from the burning of fossil fuels. These fossil fuels trap heat into the atmosphere, creating what you may have heard of as the greenhouse effect. The scientific evidence is clear, and the scientific community agrees that climate change is an existential threat to our very existence. But what does the public think? According to a study conducted in April of 2020 by the Yale program on Climate Change Communication, there are a few interesting poll results to give a general overview of how Americans currently view climate change. 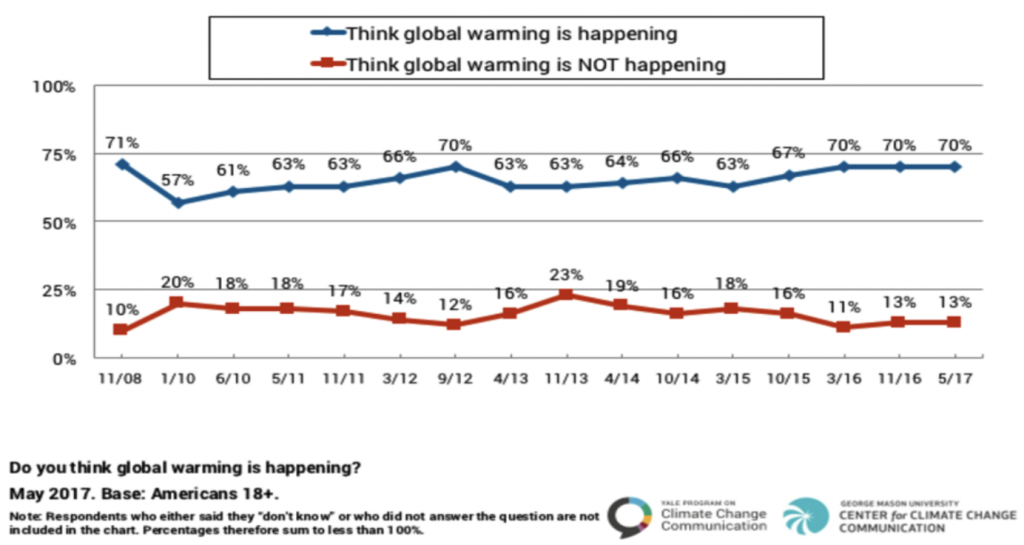 The chart above shows the percentage of Americans who did/didn’t believe in global warming happening vs. not happening in 2017. As you can see even three years ago between 60-70% of Americans consistently said they believed while only a peak of 23% said they didn’t.

Even though it seems that United States citizens are mostly coming to terms with the occurrence of global warming, there are still people out there who deny the fact that global warming isn’t happening. Some believe in the change, but do not believe it will be a big deal for them personally or that there are other more pressing issues to resolve. These people choose to discard its relevance and are largely unaware of the true harm that global climate change poses. These people hardly get excited about solar energy’s potential to alter the current course we are on towards climate devastation. The amazing thing about solar energy, however, is that it not only has an incredibly positive effect on our planet’s environment, it also provides value to today. The average American homeowner in the majority of states can save money immediately with a purchase of a residential solar array. By making that purchase with a local company, solar energy can benefit communities through job creation and business ownership opportunities.

There are plenty of ways community solar can positively impact all the people within it. For example, even if you do not own your home and can’t make the choice to add solar panels to your roof, community-based projects create access to solar for all residents. This is done through the use of solar panel farms, which allow everyone to enjoy the savings and positive environmental effects of solar energy! Another benefit of having shared community solar energy is that houses don’t need to have individual installations. This means that if your home is shaded or your roof is not shaped just right for supporting panels, community solar allows all homes to draw from one solar energy source, and collectively receive cheaper utility bills. The most important aspect of solar energy created in a community is that it helps to build energy independence. By adding community solar to an area, it helps Americans to “rely less on global energy markets, protecting us from unstable energy prices and supply disruptions.” (What Are the Benefits).

Aside from offering massive communal benefits in terms of saving money, solar energy in general already has created over one hundred thousand jobs in the United States based on a study done in 2016, and solar has only continued to grow since. Solar photovoltaic installer is the fastest-growing job in America. Solar is creating new employment opportunities faster than any other energy source combined. 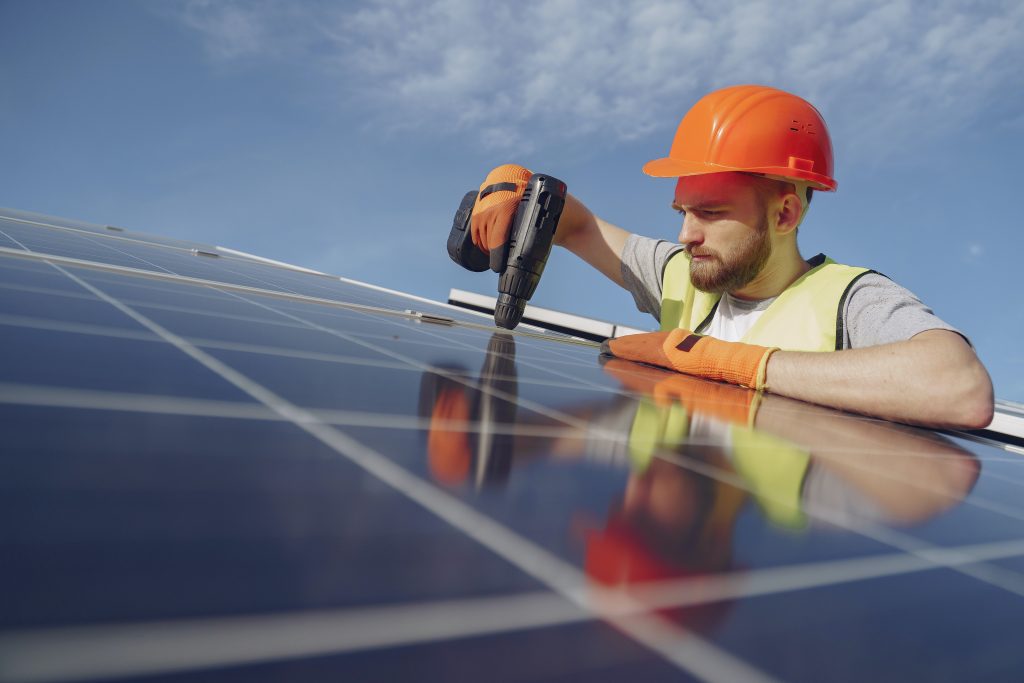 This is a Solar Photovoltaic Installer. They have a median yearly pay of 38,000, median hourly wage of $18 USD per hour, require a high school diploma or GED, and are expected to grow as much as 24% over the next ten years based on a study conducted in 2014.

Solar energy not only benefits the environment that encompasses us all, but it can also have positive impacts on the communities we live in right now! Individuals are benefitted in that solar energy creates ways for all residents to save money, while simultaneously providing communities with economic stimulation in the form of increased cash circulation and job growth. The beauty of renewable energy is the fact that it helps people on all fronts. NO sacrifice needed to believe in and support solar energy! If you’re someone who is not so concerned with climate change, you must ask yourself “what kind of world do I want to leave for future generations? What kind of world do I want my kids and grandkids growing up in?” The planet is warming and all the scientific evidence shows we as humans are to blame for the huge decline of our shared home. With ever-advancing solar energy innovation, companies such as Solar is Freedom® are able to help people protect themselves and their loved ones from an unclean future. But the best part? Solar also has the power to inject local economies with jobs and increased value. Every property owner can actually start to collect the benefits of solar energy right here in the present.

By adding solar energy to the communities of today, we can show the youth that it’s never too late to keep fighting for a just cause. That no matter how far down the wrong path you’ve wandered, you can always reroute. We can lead by example and start taking responsibility for our communities and our environment! Solar energy is something that not only protects our future and the environment that surrounds us, but also protects the present by stimulating the economy and instilling hope for what lies ahead.