Battery Storage for your Home

Energy storage has long been considered the key to a stable grid powered by renewables and is rapidly increasing in popularity. Specifically, residential battery storage has seen skyrocketing demand, as it offers many benefits to solar homeowners. Regardless of their region, energy needs, or system size, solar for the home offers homeowners more control over their energy. The International Technology Roadmap for Photovoltaic (ITRPV) found that in 2020, 4% of global PV solar installations incorporated batteries. They project that by 2030, 50% of installations will be solar and storage. That type of industry growth is rarely seen. 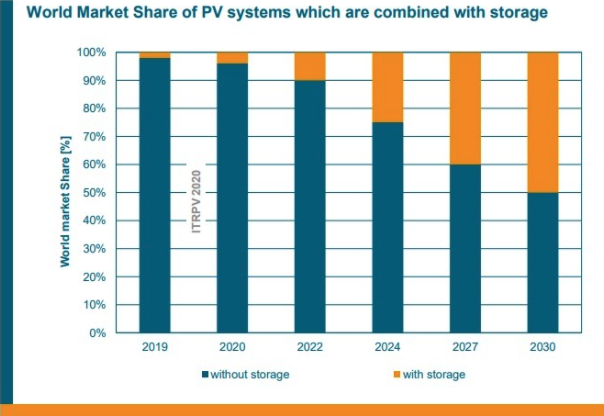 In addition to homeowners recognizing the benefits of battery storage, non-residential storage deployments are rising. In January of 2021, the largest single-site energy storage project in the United States began in California, just south of San Francisco, at the Moss Landing Power Plant. This energy storage facility is a whopping 1,200-MWh and is likely the largest in the world. The energy storage facility was a response to the unreliability of the California grid, which faces emergency shutdowns due to wildfires and other inclement weather events.

What is battery storage and how does it work?

Homeowners without solar receive electricity that is generated at power plants through a complex network commonly referred to as the grid. The utility that operates the grid then bills the homeowners based on how much they use, or their demand. With solar, the generation is instead done straight from the property. Panels generate direct current (DC) electricity. This DC energy cannot be used by the appliances in your home, so the DC energy gets sent to the inverter to be converted to alternating current (AC) energy, which can then be used by your home. In a system without battery storage, this is all that occurs, and when you are not producing energy, the home simply draws from the power grid. In a solar array with a battery backup system, the DC energy travels from the panels to the charge controller, which determines how much energy should go to the battery. When the system is creating more energy than the battery can handle, the charge controller sends the extra energy to the inverter. This system requires a special type of inverter known as a hybrid inverter. The hybrid inverter knows to take energy from the battery when it detects that there is not enough energy coming from the grid, like in an outage. It also knows to take energy from the utility if the battery is not charged. The behavior of the system is heavily reliant on the time of day and production output. In the morning when the sun is low, the panels are producing low amounts of energy. As the day goes on, the sun rises and the system produces more and more, especially in the middle of the day when sunlight is peaking. At this point in time, the array will typically produce more energy than the home is demanding. The battery then stores that excess energy that the panels create. During the evening and the nighttime, the sun drifts away and the system is no longer producing. At that point, the battery storage system takes over for the panels, and the home consumes the stored energy from the battery. If the stored energy can not meet the demand of the home all the way through the night, then the grid will take back over until the next morning.

Why is battery storage beneficial?

One of the biggest benefits of adopting battery storage is to lessen reliance on the grid. This complex system is made up of electricity substations, transformers, and power lines that deliver electricity to homeowners. In the United States, there are hundreds of thousands of miles of high-voltage power lines and millions of miles of low-voltage power lines that make up the electricity grid. While this system has traditionally allowed for electricity to be widely available, many issues arise. One major issue is that about 6% of generated power is lost during the transmission process, mostly as a result of the long distances that the power must travel. Additionally, when the grid goes down, all of those reliant on it will be without power. With battery storage, homeowners are able to avoid those power outages, making the home more resilient. Additionally, battery storage takes demand off of the grid, which is already overworked. This overworking leads to expensive bills from intense demand and blackouts, which storage systems can help alleviate.

In many areas, residential energy consumers experience peak demand charges. This means that when demand is at its highest, the cost to the utility to deliver that electricity to homes is at its highest point. This is usually due to the fact that utility companies have to turn on more generating capacity, known as peaker plants, or buy more electricity from other areas of the country for resale to meet demand. In some parts of the US, this cost is passed on to the homeowner through peak demand charges. In order to properly levy these types of extra fees, the utility company needs meters that are capable of transmitting usage data in real-time, or as close to real-time as possible. These types of meters are often referred to as smart meters. Just about every utility in the country eventually wants to have all their homeowners on smart meters, and are actively working towards that. Homeowners have no way to avoid this and may be stuck with peak charges and ever-increasing energy bills. However, with a home battery programmed to offset your peak demand, homeowners can avoid paying two to three times their normal rate. The battery is simply set to discharge or put out electricity during the peak hour or hours. This can save homeowners thousands over the life of their systems and can protect homeowners who are not currently experiencing peak demand charges from that eventuality.

Battery storage is also especially helpful in the face of global climate change. In a changing climate, natural disasters and extreme weather events are becoming more and more common. Wildfires have increased in the West, hurricanes and sea-level rise have impacted coastal communities, and changing precipitation patterns have caused flooding in some areas with drought in others. With more frequent and detrimental weather events, it is crucial to prepare homes for whatever may occur. With battery storage, homeowners can feel secure knowing that whatever may occur, there is a backlog of energy that a battery system has created and can be used whenever needed. This protects the home and will give the owner peace of mind, knowing that the battery storage system has it covered.

Adopting battery storage in addition to your solar PV system only enhances the benefits of solar. Battery storage removes the dependency on the grid, granting you energy independence and giving you peace of mind. It is especially important to create resiliency in the face of global climate change, which offers so much uncertainty and danger. The addition of battery storage will give you a sense of security, all while adding value to your property.