Solar Roof on a New Construction Home in Delaware, Ohio

This project in Delaware, Ohio near Columbus was a massive undertaking for the design and installation team. The sales team went out and gathered pictures, a copy of the energy bill, and prequalified them for financing. The home’s annual consumption, which is found on the bill in kilowatt-hours, was an immediate indicator that this system would be large. With plenty of roof space and favorable net metering policies, this project was able to be sized appropriately and done right. This project was not just able to be accomplished, it would actually result in one of the best return on investments that Solar Is Freedom has done. 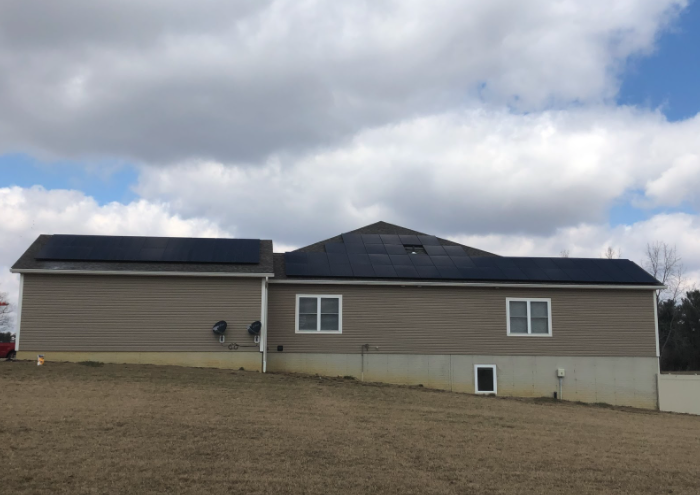 The project consists of seventy-two Jinko 320-watt solar panels over three roof faces, which presented some challenges when it comes to wiring and conduit runs. The three separate arrays needed to all be connected to the single meter on the property, and tied into the electrical panel in the basement. The design team prepared the most logical layout for the electrical team, and they got to work. In addition to the 72 panels, there were 72 SolarEdge optimizers and two SolarEdge inverters used, resulting in multiple “strings”, or groups of panels. This adds complexity to the job and, for inexperienced teams, could present a problem. Running the strings incorrectly can lead to the inverters missing panels or not getting full production out of all the panels. The project was completed in only two days and on day two, all 72 panels and optimizers reported, meaning the job was installed 100% correctly.

When it was finished, the arrays offset over three-hundred and thirty-one dollars a month ($331/month) in electricity costs. This project was the result of an early start and hard work from both the panel installation crew and the electrical team on both days. This project offsets the family’s entire electrical consumption for the year and erases their carbon footprint while saving them tens of thousands of dollars over their warranty period!