This beautiful home, located north of Cincinnati in Dayton, OH, decided to make the switch to solar energy in early 2019. This design technically has three separate arrays, seen in the photo below, as the design team utilized three different roof faces for the panels. The information gathering for this project revealed a service panel that would need to be upgraded in order for the home to support solar. This was priced into the Solar Is Freedom proposal and was completed before the install took place! 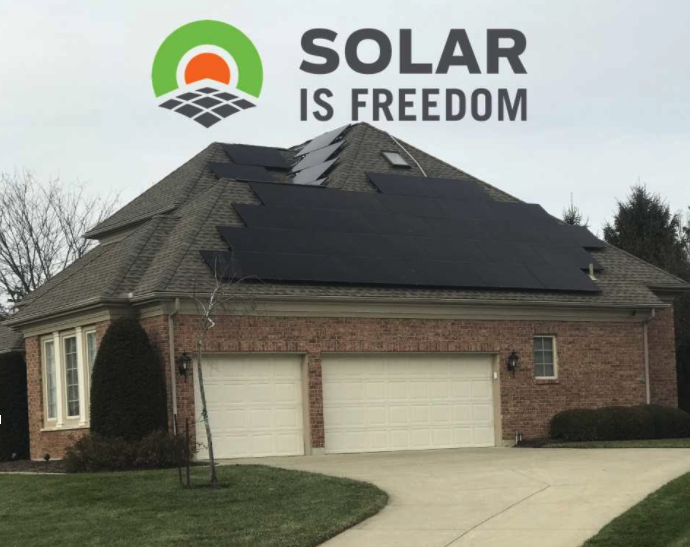 The majority of the panels are south-facing, which is the best possible panel orientation to maximize production. However, panels installed with an east or west orientation do not see a significant drop-off in production. Also, with net metering, it does not matter where the panels are installed or at what times of day they produce, as the utility company is required to give credits that roll forward. This is why no storage is needed to power the home at times of no sunlight, like overnight.

The 28 panels are Jinko 320-watt and the SolarEdge inverter equipment included one central inverter and 32 optimizers. The installation team was able to string all the panels together on one inverter and run everything through one clean run of conduit. The panel installation team was able to connect all three arrays with no difficulties, and the electrical crew had the inverter pair with all 28 panels on the first try. The entire process from start to finish only took about 9 hours. This system size falls in line with the average Cincinnati area homeowner and the panels will save the homeowner one-hundred dollars a month ($100/month), based on the current utility rate being charged to the homes by the utility company in Dayton, Dayton Power and Light (DP&L). That number will only grow over the 25 year warrantied period and this homeowner will save tens of thousands of dollars.